We’ve already had a host of derbies over the over six rounds of this season’s Kenya Cup .There was the Nakuru derby on match day one which saw Menengai Oilers defeat Top Nakuru 31-5. Last weekend saw rugby’s version of the “Mashemeji Derby” as Western Bulls prevailed over Kisumu 23-5 in Kakamega.

Saturday 7 December 2019 will be no different as eternal rivals Resolution Impala Saracens host Kenya Harlequin in yet another instalment of the Ngong Road Derby.  The Saracens come into this derby clash placed fourth on the log with 20 points coming off four wins and two losses. They are in better health than their next door neighbors who haven’t had the best of starts to the season, registering one win and five losses in their six outings to date, an outcome that sees them placed ninth on the log with 7 points.

Despite their current run of form, it is Quins who come into this fixture having won their last two league encounter, a streak that Impala will be out to stop. These two sides last met in Kenya Cup action during the Top Six playoffs on Saturday 27 April 2019, Quins just shading Impala 29-24 to reach the league semis where they fell 46-13 to eventual winners KCB.  Quins had earlier won their regular season encounter 37-24 on Saturday 26 January 2019.

Match day seven takes place this Saturday…
as always..another six matches on the cards including derbies in Nairobi and Kakamega

The Impala-Quins clash is known as the Ngong Road Derby

What do we call the Kabras-Bulls derby?
Vote now

Over in Kakamega, the Ingo Derby returns for the first time since the 2016/17 season when current leaders Kabras Sugar take on town rivals Western Bulls at the Moi Showground. Both sides warmed up for this encounter in style, Kabras ending an 11 match winless streak against KCB with an authoritative 19-6 defeat of the current champions while eighth placed Bulls ensured that they remained unbeaten in the Kenya Cup, posting a 23-5 result in what was only the second ever top tier clash between the two sides.

In other fixtures, defending champions KCB will look to bounce back from last weekend’s 19-6 defeat to Kabras Sugar when they face fifth placed Stanbic Mwamba in what should be an exciting fixture at the Nairobi Railway Club. Fixtures between these two sides are never short of nerve wracking moments and Saturday’s encounter should be no different.

Elsewhere, third placed Homeboyz are on the road, playing against bottom of the table Kisumu at the Kisumu Polytechnic.

Tenth placed Blak Blad will be at home to Menengai Oilers at the Kenyatta University as eleventh placed Nondescripts take on Top Fry Nakuru at the Jamhuri Park. 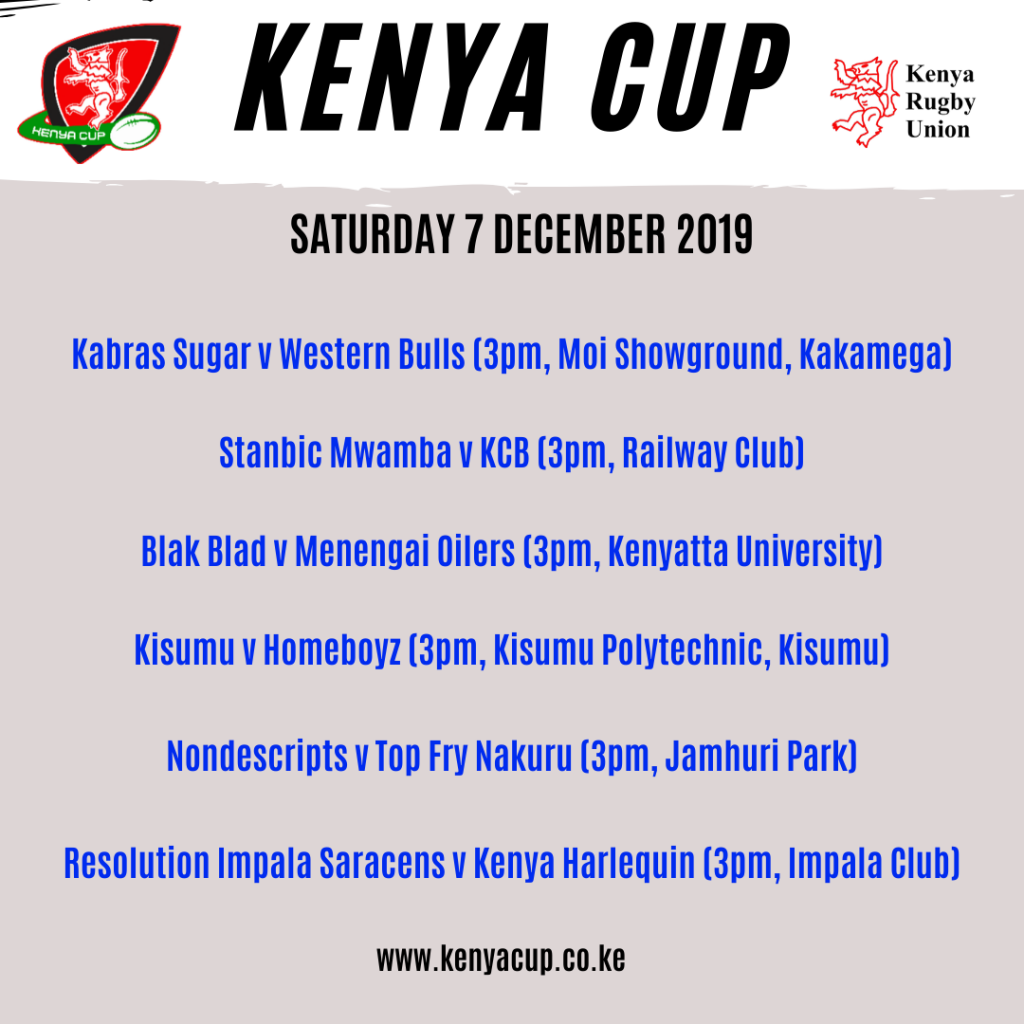